Would You Wear Zombie Scented Perfume? 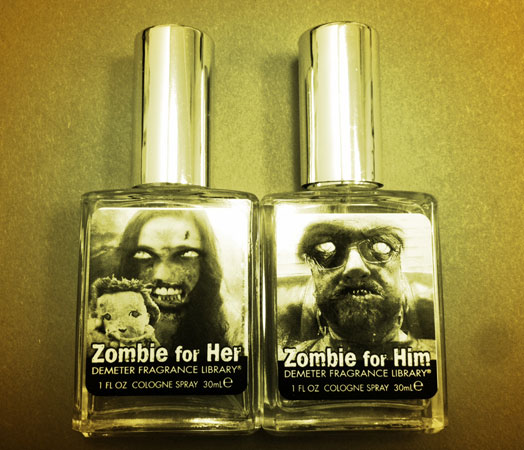 So you're a huge fan of The Walking Dead (we're obsessed) and you've seen every zombie apocolypse movie from Night of the Living Dead to Shawn of the Dead, but are you a big enough zombie fanatic to want to smell like the dead? Demeter Fragrance Library, known for it's massive variety of scents, is launching two limited-edition fragrances inspired by zombies. Seriously!

Zombie for Him and Zombie for Her are said to help you survive the apocolypse. How? Well, since you smell like a zombie, other zombies won't go after you, duh! The men's and women's scents are blended with notes of - are you ready for this? - dried leaves, mushrooms, mildew, moss and earth. In addition to those notes, the women's scent also includes a touch of Dregs from the bottom of the wine barrel ("for a feminine touch").

We can't imagine who would want to smell like a real zombie but it could be the perfect touch for the ultimate Halloween costume, no? The limited-edition cologne sprays will be available from March 15th to April 30th at www.DemeterFragrance.com.