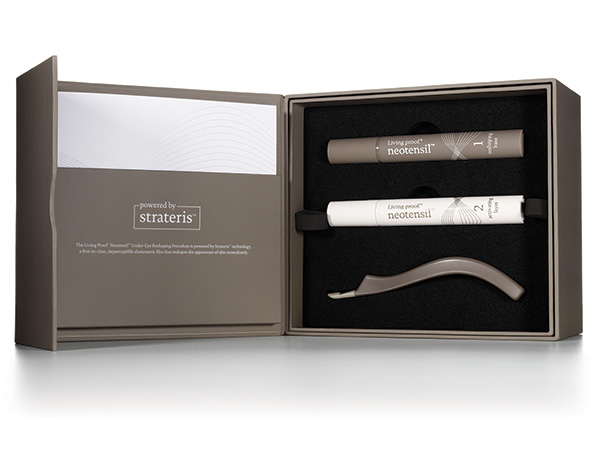 The undereye bags that many of us develop with age are one of the hardest beauty issues to treat. Concealer can’t hide them, eye creams can’t cure them, and sleep won’t magically make them disappear. The only way doctors have come up with to reduce bags is by surgically removing them — until now.
Living Proof, the brand known for its silicone-free haircare and its spokesperson/part owner Jennifer Aniston, has just introduced a new treatment called Neotensil, which creates an invisible film that works like shapewear for aging skin. When applied to the area under the eyes, the two-step treatment creates a breathable polymer mesh that tightens and compresses protruding bags for up to 16 hours. This is some seriously futuristic stuff.
Here’s how it works: After cleansing the area, you apply a thin layer of Reshaping Base treatment to the undereye area, then follow with the Activating Layer. The treatment begins to tighten up the area over the course of an hour, during which time you have to remain expressionless so smile lines don’t disrupt the process. The treatment is available only through dermatologists’ offices, where a medical professional will instruct you on the right way to use it. 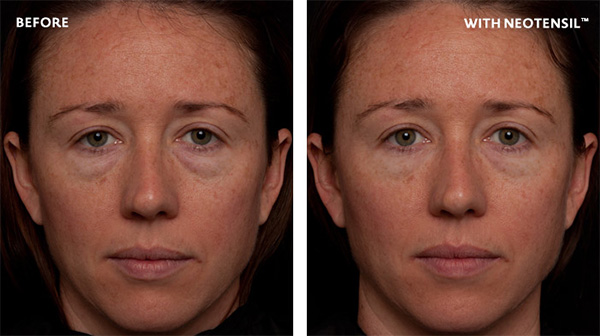 When I first saw the before and after photos, I was convinced that they’d been Photoshopped. That smoothness under the eyes in the “after” shot looked like the telltale work of the blur tool. But I actually met a woman who’d had the treatment in person, and the real-life results were impressive. She’d used Neotensil under her right eye only, and the difference between the two was striking. Her right undereye area was visibly flattened and smoother looking, while her untreated eye looked tired. Apparently, the Photoshopped effect is a bonus — the treatment changes the way light reflects from the skin, hence the soft-focus look in photos.

I met this woman in person, and the results really were this striking IRL.

But even more exciting is the Strateris skin technology behind Neotensil. Living Proof is working on tweaking the invisible film so it works on other parts of the body. Soon we could see a lifting version for forehead wrinkles (an alternative to Botox?), a treatment for wrinkles on the neck and décolletage and even a temporary fix for cellulite (!). The film basically replicates young skin’s elasticity, acting as a temporary replacement for the elastin that we all lose with age.
But right now, Neotensil isn’t for everyone. The treatment only works on undereye bags caused by fat pads, which become more prominent as we age and the skin around them loses elasticity — a genetic trait that’s not the same as the puffiness you wake up to after, say, drinking a pitcher of sangria. There’s also the price. At $500 for a seven-week supply, the kit isn’t cheap — but then again, neither is surgery.