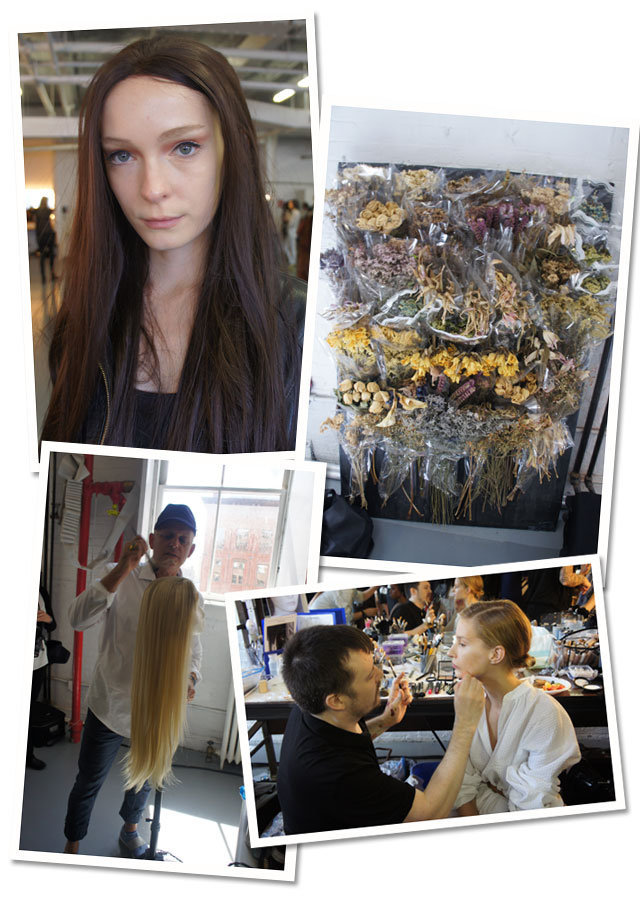 How does a collection's inspiration translate to a beauty look? At Sally LaPointe, it was all in the makeup. Sally was inspired by deli flowers (the ones wrapped in cheesy cellophane) from the NYC streets for her spring 2014 collection. Instead of a mood board backstage, there was a large display of wilted flowers hung up against a board. Let's just say the scene backstage wasn't exactly what we normally see. (More on that later.)

But, first, let's talk about how MAC makeup artist Kabuki managed to create a makeup look inspired by deli flowers. It's actually quite simple. He used a mix of textures and colors on the eye (in a cool, graphic sweep) to reference the flowers' colors. He opted for rusty hues to mimic dried out blooms and a "slither" of shiny black liner topped with brow gel to mimic the cellophane. Genius, no?

The wow-factor continued over in hair where Pantene celebrity stylist Danilo prepared long, stick-straight wigs for the models. Some got black and brown, while others scored Barbie-blonde hair. The wigs were a nod to the "gothic elegance" that Sally is known for. But the coolest part was seeing the way Danilo prepared the blonde wigs. He was actually painting them with a mix of liquid makeup to "add roots and realness" to the color! Because, let's face it, blonde wigs tend to look really fake.

So that, ladies and gents, is how inspirations come to life. Cool, right?